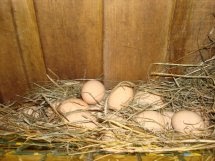 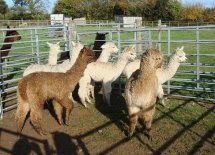 Well - we do not have many hens at the moment - some died of old age presumably, the fox got some, but we were getting two or three eggs a day until recently when it went down to only one.  We resigned ourselves to chosing eggs for cakes or frying but not both on the same day until either the spring or until some more start laying again.  Nick and Mike discovered the nest of 18 eggs pictured above when they were going around checking the fence posts on Tuesday!!   Mystery solved.  They were in a hay rack in one of the shelters.  One of the down sides of free-ranging hens!!  Still I love seeing them wandering around the place.

Over the past few weeks we have been worming, drenching with ADE, and giving the herd a preventative dose of Fasinex which eliminates liver fluke which can be a killer.   We weighed all the cria again and the photo shows some of them looking rather bedraggled and fed up in the catch pen, and looking forward to going back to their six acre paddock where most of the herd spend the winter months.

We were pleased that one cria (recently weaned) had maintained the same weight but all the others had made significant gains.

We kept two mums back when we sent the herd back down as their cria were ready to wean.

Mike and I went to an Anthony Clarke training session yesterday.  The Sunday was fully booked, but Kim, the organiser fitted us in for a session at her training venue which is outside.  We were very lucky with the weather.

It was only about half an hour away and we really enjoyed it and found it very useful.   Mike's new attempt at making Jake wait was very successful.  He was able to leave him for more than two jump's distance until the very last exercise when we thought he was starting look as though he might revert to his bad old ways, so instead of allowing this, I held him at the start.

Dolly, as always was very good and caught on to what she was asked to do very quickly.
Posted by Geraldine at Sunday, November 06, 2011