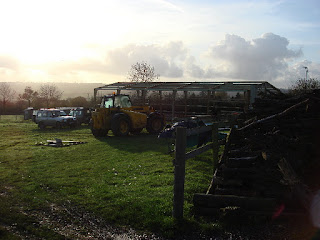 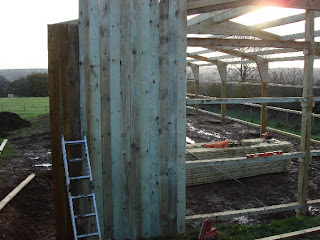 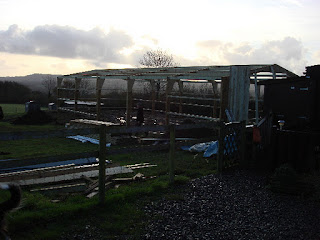 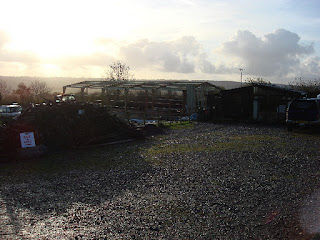 They started cladding the barn today and expect to have it finished next week.   The builders are only able to come about 2 days a week at the moment as they are also working elsewhere.  Once they are finished the floor will have to be concreted and some internal walls built.
The bucks seem to be having foot trouble at the moment.  We keep having to clean out their hooves and spray with blue spray. It is probably Strip caused by the warm damp weather.  It is a bacterial infection which seems to cause pain outof all proportion to its appearance.
Seven seems to be doing quite well and is holding her own in the eating competitions.  She was scouring again a couple of days ago so I dosed her against worms again which seems to have done the trick.
Today we re-scanned a few females whose pregnancy was iffy.  Most of them appear to be pregnant so we should have a good haul of cria next year.  We are hoping to redress the balance of the last two years where we have had far too many boys.
Dolly came to fetch both batches and did most of it herself without stressing the alpacas at all.   They hardly broke out of a walk.  Mariana, a young pregnant female tries to argue with her and it will be interesting to  see if Dolly wins the war.
We have just bought  a loom.  It is only small but we are hoping that if we get on with it OK we will be able to progress to a bigger one and make throws.   When we used to import them from Peru they sold well, so we hope we can make them pay using our own wool.  Mike is quite keen to have a go,and I am really glad because the loom looks very complicated so needs his engineering skills.  It has inspired me to have another go at the knitting machine, especially as there is now a group of alpaca owners in Devon pooling resources to enable us to pay an affordable price for trade stands at agricultural shows in the area.  If that idea develops it will be a new outlet for our alpaca products.
﻿
Posted by Geraldine at Wednesday, November 30, 2011