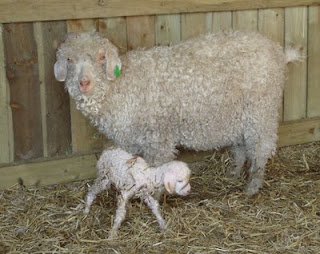 We went to dinner with some friends who live in Broom Lane, just round the corner from us, on Saturday night and had a lovely relaxing time.   Walking home we decided that we would not open the farm gates on Sunday and would just do the minimum to keep things going.  We had a full English breakfast and made a casual start.  Mike sauntered over to the goathouse at about 9.30 a.m. and found that our first kid had arrived.

He was tiny and, of course, very wobbly.   I joined Mike and he held the doe whilst I quickly checked the kid over and sprayed his belly with anti bacterial spray to preven infection.   We then checked them every half hour and became concerned that we had not seen the kid suckle.    It was possible that he had suckled without us seeing him but he seemed a bit lack lustre, so I gave him a shot of high energy colostrum paste to boost his energy levels.    We then caught the doe and I guided the kid to her teats, having checked that she had milk.   Eventually he got the idea and had a reasonable feed.

Every time I checked on them he went to suckle, which is normal when a mum and baby are disturbed, but he did not seem to be going to the right place and spent most of his time nudging her front end or falling over.
His tummy did not feel full and we were worried about leaving him over night so we made the decision to milk his mum and either bottle or tube it into him.  We are always reluctant to intervene unless really necessary so it was a great relief when we went over to carry out our plan to find the little monkey suckling for England.  I felt his tummy and he felt like a lovely warm puppy with a little round tummy.  No worries in the end.

When I checked on him this morning he seemed bright as a button.

Bono is looking quite good this morning.   Looks like it was the right decision to take him off grass for a while.   We will now gradually reintroduce him to it until he is well enough to go back into the boys' paddock and eat normally.

The weanling with the abcess is definitely getting better but we have called the vet out to have another look at her as we think it might need lancing again.

Romie seems to be recovering very well from her operation and Dolly is starting to look a little less puppy like and more like a miniture dog.   She still acts like a puppy, though, and has taken a great liking to running off with anything that belongs to me.   Usually it is shoes but yesterday I found my shirt was missing from the back of the chair where I had left it.  It turned up in the garden.
Posted by Geraldine at Monday, May 24, 2010