Good, Not So Good, Worse and Worst 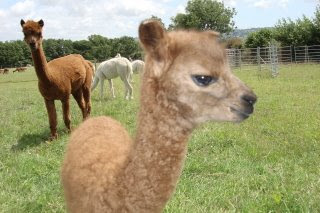 Well to be fair we have had a very good run of things going well - more girls than boys - mostly straight forward births and of course, good weather.

The good news is that when I went to move the alpacas from their night paddock (which has a shelter in case of bad weather) to their day paddock so we can watch them more closely, there was an extra cria (see photo). Although it was only about 9.30 a.m. he was already dry and walking around so he must have been a real early bird.

Not so good is that two maiden females that we took for mating do not seem to be pregnant so we will have to take them back to Wellground Alpacas for remating. It is not unusual that females who have not been pregnant before do not fall straight away.

Worse is that Celia, a black female that we have had difficulty in getting pregnant until this year has given birth to a male multi - two tone - alpaca. This is particularly disappointing as she was mated to a renowned black stud male, so as far as improving our herd goes it is wasted money. Her first cria was solid black but because of the many colours of the alpaca they do revert back to earlier generations and pick up unexpected colours. It might be her ancester or the male's ancester's genes.

Worst is that the third birth of the day was a breach. Unfortunately with Mike being away it took me a while to catch her so that I could see what was wrong. I could only locate one leg and the placenta came out without the cria. I called the vet but we could not save the cria. The mother seems OK and has just been given a long acting antibiotic as both me and the vet had been rummaging inside her, poor girl. She seems to be relaxed and comfortable now and as it was her first cria she probably does not realise what should have happened. I was very pleased that Tessa came out as she is a really lovely vet - down to earth and caring at the same time. Luckily for me she was just going home for lunch when I rang the surgery.