There must be some grass here somewhere 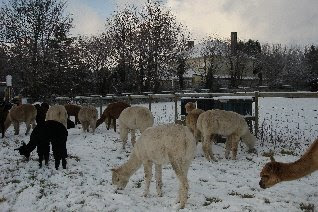 We were really quite concerned when the bad weather was forecast as we were running out of hay and straw. Our normal local suppliers had run out or only had the huge bales which we do not have handling equipment for. Luckily our trusty friends Lynsey and Ian from Dreamfield Alpacas came to the rescue and delivered 50 bales of hay on Sunday and Bob and Phil from the village brought a few bales of straw.

Their farm is in Chardstock and the building of drains for the new school has meant that they were trapped and could not get their tractor out. They came to the rescue on Friday and delivered 5 bales in their landrover to keep us going and then delivered another 20 on Monday. This meant that we had enough to even though the weather came in with snow, winds, and freezing temperatures.

The alpacas are happy in their routine. They disappear to the bottom paddocks during the day and at about 4 p.m. they mooch up to the yard for their supper and at dusk I let them into the barn and the chickens waddle over to their hen house.

We have even managed to keep up with paddock cleaning thanks to the dedication of my friend and neighbour, Pam, and the fact that the snow has come in installments and melted between times.

The alpacas seem quite pragmatic about the snow and simply seem to believe that there must be some grass there somewhere, or else just give in and spend most of their time around the hay racks.

Colin Ottery, the shearer, is coming on Saturday to tidy up the 6 cria that we have selected to show in the spring.

Mike is recovering well and doing more each day although he has bouts of quite severe pain from time to time still.

They are keeping my mother in Musgrove in Taunton for another two weeks to give her physiotherapy and other treatments to help her maximum recovery from the stroke. She will then be assessed and her future will decided. She may have to move to a nursing home but at the very least she will move to Chard hospital which is much nearer to us and easier to visit, although they will not have the same treatment facilities.

Last Monday I had an appointment to visit Mum's Consultant, but the weather was too severe to risk the journey so I spoke to her on the phone at the appointed time. When I came off the phone Mike showed me Polly (kitten) who was breathing badly and was obviously in distress. Her sister was hissing at her - possibly because she did not understand the new behaviour. They had been in the house at 3.30 p.m. so she had suffered some sort of trauma within an hour or so.

I rushed her to the vet - including a huge detour because I followed diversion signs which brought me back to the closed road (due to drainage work) in Chardstock. I started out again and finally arrived at Coombefield Vet Hospital where Tina, the Vet, confirmed that she had suffered some sort of injury. Neither the dogs nor the alpacas were near her so we are assuming she either jumped or fell and accidentally landed on something.

She had air leaking from her lungs into her chest cavity and this had to be drained. She had Xrays and treatment and stayed in overnight. The "free" kitten has now cost us about £200 so she had better start catching some vermin soon. She seems fine now, although her sister was very hostile when she first came home. Perhaps she smelt of the Vet's. The sisters seem to have bonded again and the injured kitty seems fine apart from a bald patch on her side where they put the drain in.

We are hoping for an extremely uneventful time from now on - although David, my son, is going to try and tow the landrover and trailer out of the mud tomorrow so that might be quite dramatic.
Posted by Geraldine at Thursday, February 05, 2009