Now Ninette has been joined by Zacharia and Coco.   Coco has very unusual markings and a character to match.  Zacharia had a shaky start.

He seemed fine when first born but then had difficulty in standing up and I had to help him to stand long enough to suckle and make sure he had his all important colostrum from his Mum.

He became stronger but kept collapsing and then reviving and standing up like a normal cria.  I was concerned that he might have epilepsy or some sort of brain damage especially after I noticed he was lying down as if asleep.  When I checked him he was floppy and his eyes were not really shut.. I called the Vet.

When Tom (the Vet) arrived Zach showed no sign of his strange behaviour. .   I explained that he would seem normal and then collapse whilst waving his head around.  It was a strange sight given the long necks that alpacas have.  Tom was about to go when, as if on cue, Zach literally fell down in a heap.

After a dose of Metacam to alleviate possible inflammation of the brain, the only thing to do was to keep a close eye on him.  Luckily the medication worked and he is now frolicking around with the other cria. 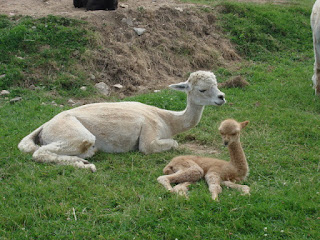 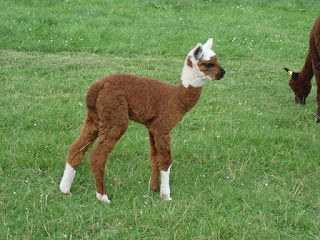 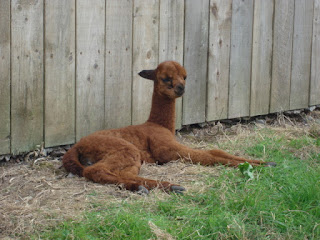