Even the alpacas were surprised to hear Victor, our resident cockerel. He has has finally achieved it.   For ages he has been croaking.  Then he developed a "cock-a-dooerrr" but this morning he gave forth a true Cock-a-doodle-doo!  Luckily it was about 9.30 a.m. and even then it was not too raucous, so fingers crossed he will remain conservative in his vocal efforts.  I think it will be a mixture of crowing and croaking for a while yet. 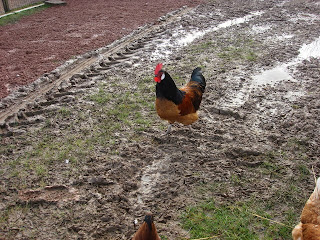 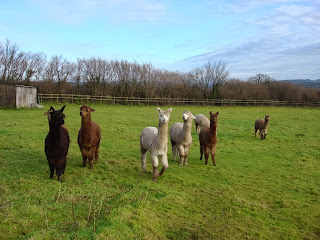 Who needs expensive climbing frames for the chickens when they can play in Mike's yard!! 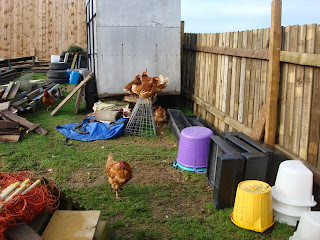 Having quite a few hens and their feed,  has been an attraction for rats and I have been trying all sorts of things to keep them away.  I sprayed the perimeter of the pens with Jayes Fluid and put concrete blocks all around the fencing of the pens.  It all worked for a while  but the little devils kept finding other ways to raid the chicken feeders, so it was a constant battle.  The final straw was when after several weeks of covering the feeders every night and blocking them off with concrete blocks and wood panels, one came back again and actually chewed the side out of one of the feeders, leaving a neat circular hole.

Now at night  I take their feeders into the shed where I keep the chickens' straw etc: so that there is nothing left to attract vermin.  The chicken are fed outside their pen during the day when the dogs and alpacas are around, not to mention the cat, to deter invaders.

The downside was that the area became very muddy and unpleasant in the wet weather and the feeders also became encrusted with mud not to mention the dogs and me, so Mike has now spread an area with scalpings so that the feeders can remain clean and I can get to the shed and the feeders without sinking into unsavoury mud. 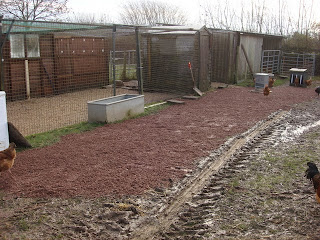