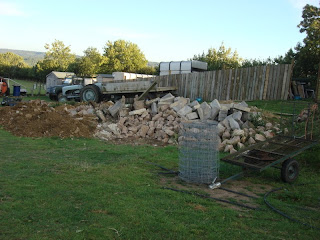 It was Nick's day for helping Mike and they made a very impressive start on moving the stones, debris and earth that was left behind when they stripped out the barn which is now our house.  They spent nearly all day digging out the pile and transporting first the hard core and then the earth down to the winter paddocks.   The plan is to make a track round the edge of the field which will be firm underneath but will then grow over with grass so that it does not spoil the scenery or detract from the amount of land that can be grazed.  It will allow tractors and other farm vehicles access to some areas which are now too boggy to navigate.

When they had nearly finished for the day I took Dolly down to put the hens away.  This is her favourite job of the day and she now seems to know which hens belong in which run without me telling her.   She wanted to go into the run where the newbies live and I tried to stop her because I did not want her to chase them outside.   She insisted and when I went to investigate I found that our young cockerel was in there.  Of course she was right and when I told her it was OK she rounded him up and chased him, protesting loudly, back to his righful home.

In passing Nick and Mike told me that I needed to look at one of the hens as her spur claw had caught in her leg ring.   Nick went home and Mike went indoors leaving me to it!  I quickly identified the hen in question and she certainly had a painful looking swollen claw.  I caught her and her claw had been partially severed.by the ring which she had somehow managed to get tangled in.  I managed to get it off and carried her up to the barn and sprayed it with some antibacterial foot spray that we sometimes use on the goats or alpacas.  Of course I managed to spray my fingers too.

I am now crossing my fingers and hoping that it does not get infected and that the circulation was not cut off for too long before I rescued her.  I threw the ring away.  It is meant to identify the age of different batches of hens, but since neither me nor Mike are likely to be ringing the necks of any chickens who are too old to lay eggs, we do not really need to know their ages.  I expect one day we will have a flock of  geriatric hens who just get fed and enjoy life.
Posted by Geraldine at Tuesday, September 10, 2013