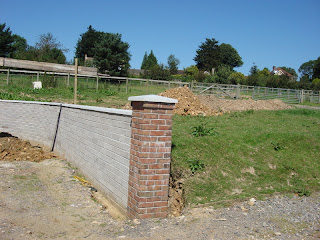 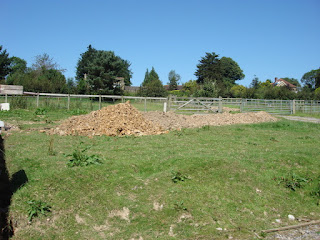 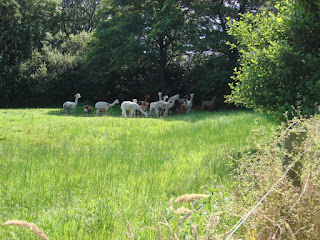 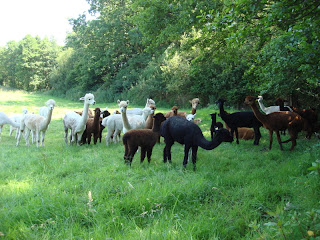 Yesterday Nick and I  got together to carry out fairly basic husbandry - mainly vaccinating, microchipping and tagging cria.  First of all we selected Ginger's cria.  We did not tag or chip her last week as we felt she was a little small.   She trotted into the catch pen with her Mum and we shooed Ginger through so that they could see each other but giving us easy access to the cria without Ginger interfering.  I had prepared the microchip and Nick set up the tagger with ear tag.  Whilst he held the cria I thought I would check that the needle which holds the chip was secure on the dispenser.  Somehow I knocked the protective cover off  and managed to gouge the top of my left index finger.   It just would not stop bleeding, so Nick had to get a plaster from the first aid box so that we could continue.

When he came to hold Valentine (we are nearly at the end of the Shakespearian heroines when naming the newborn) - she was extremely stressed and worried about being kept away from her mother for so long, so we decided to tag her and leave the microchipping for another day.   At least we can identify her even if she gets separated from her mother.  We decided to do the same with the other cria too as they are all a little small and there is no rush as they will be on the farm for at least another few months.

Vaccinating is normally subcutaneous (under the skin) and you make a tent with loose skin, usually just in front of the front shoulder, so that the vaccine goes into the cavity created.  I am usually pretty accurate and quick at this, but of course it went wrong with one of the littlies yesterday and the needle came out the other side of the "tent" and squirted the vaccine on the floor, so the poor thing had to have a second one, which went to plan.

Earlier in the day we had put Chale back in with the working males including Pedro who can be quite a full on bully at times.  I forgot that Mike had shut the gates across the bottom of the race so when I took the Mums and babies back down there was a bit of a mix up when they could not get through and the males realised that they were there.   Chale and Pedro started to fight (females have this effect on them).  Jake, Mike's dog, normally breaks up such fights by running in and barking at them.  It is usually very quick and effective and he stops as soon as the males give up.  There were, however, added complications.   Mike did not realise that Jake had decided to act without instructions and so was blissfully unaware of what was going on and continued to tend his bonfire.  In the meantime I opened the gate in the hope that I could rush the girls through before the males realised what was happening.


It was not be be.   The top wire of the fence has been waiting to be added  for quite a while and in the excitement of trying to get to the girls and away from Pedro it looked as if Chale was going to jump out.  Luckily Mike arrived on the scene and chased him back, but Pedro saw his opportunity and jumped out to join the girls.   They all galloped off into the paddock and we just managed to shut Chale out.

None of the females are pregnant because we are not mating them this year.  They will all be covered in the Spring so that the following year we can condense the birthing season.  This meant that Pedro thought he had died and gone to heaven.  We tried to herd Pedro out but he was too excited.   Eventually Mike caught him by the tail and I managed to get to him in time to hold him properly.   Mike then took over whilst I herded the girls into their nice peaceful paddock with the babbling brook.

I made a makeshift halter for Pedro with an old dog lead which we use to pin the gate back and he was put into solitary confirnement to calm down.  Nick and Mike rapidly installed the top wire of the fencing.

What had started out as a routine day with easy jobs turned into a wild (south) west show!!

On a calmer note - the gas men came today and laid the pipe for the supply to our new house.   They, amazingly, could not tell us exactly where the mains pipe is, so we have been unable to dig to it so far.  We now have to get our builder to hand dig the last few metres with very vague guidelines from The utility company.   Apparently they cannot trace plastic pipes like the good old fashioned metal ones!!  You would think they would have a really detailed map so they can find all their pipelines easily, especially with such a dangerous thing as gas!!  Scary isn't it?  The picture just shows the trench, but it is a lovely trench!!

The other photos are of the alpacas relaxing in the shade this afternoon.  Nice work if you can get it in this heat.   Not complaining, honest.