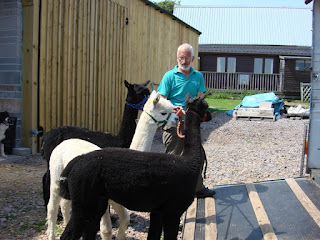 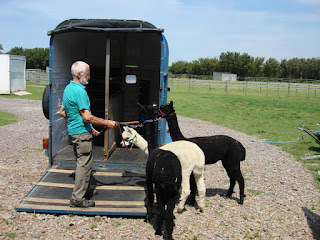 Santiago, Santos and Vidal just off to their new home.      They have never been loaded into a trailer before, but after a small question as to whether it was their best option,   they went in quite happily.

They are going to live in a very smart paddock and when they arrived they remained lying in the kush position in the trailer for a few moments before casually leaving the trailer to explore their new abode.

They have been living with all our other males since they were weaned last year and so for the past week or so we separated them from their usual companions to get them used to being a smaller herd of three.   They have adjusted very well and we took the opportunity to remind them how to walk nicely on a halter and also to being held more often than we actually needed to.  Within a couple of days they were completely relaxed so that when we trimmed their toe nails and gave them a worming injection before departure they more or less just shrugged their shoulders and said OK get on with it!!