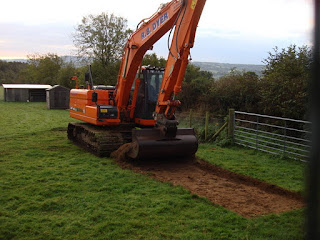 Mike received a telephone call yesterday evening to say that the digger was on its way, so we quickly called all the dogs indoors and Mike opened the farm gates to admit a huge lorry and trailer carrying an equally huge digger.  At 7.30 a.m. this morning Danny, the digger driver, arrived and commenced work.  By lunchtime he had completed the footprint of our new barn and started the levelling process which includes bringing in extra earth from other parts of the farm to form a level base.   The goat mountain and the big bank inside the farm gates have been removed and used as infill.  He is also going to take some earth away from the back of the existing barn and level that site whilst using the earth to continue the levelling process for the new barn.  Trevor, has now arrived with a big tractor and trailer to ferry the earth around.

It is absolutely amazing how he handles the machinery - he even scrapes off excess earth from the grass just as we would rake it off the edge of a lawn.

Dolly went training again yesterday.    She was promoted to another field with a flock of 80 ewe lambs.  She made a very good job of rounding them up and holding them and Freddie, our trainer, was impressed and pleased that Dolly was calm and the sheep were not stressed by her.  We spent most of the hour teaching her to "walk on" behind the sheep.  Some of the time she was on a long line in front of us and whenever she started to go too fast which might upset the ewes, Freddie would pull her back on the line whilst I told her to lie down.  This was to teach her the speed needed to make the sheep advance without stressing them out.  She really enjoyed her trip in the landrover which took us to the new field, especially as it was an excuse to sit on my lap.

Luckily I was wearing my farm overalls because I had had "normal" clothes on underneath as I was going to collect Zach and Tara who are spending a few days of their half term holiday with us.

We have set up a catchment area in the winter paddocks so that I can start to handle the cria on a more regular basis which helps to make them more cooperative when they are bigger.   Already after just a few sessions they have cease struggling and resign themselves to being held gently until released.
They all seem to be thriving quite well except one of the two cria that we weaned and he has lost a little weight so we are keeping a close eye on him.
Posted by Geraldine at Thursday, October 20, 2011