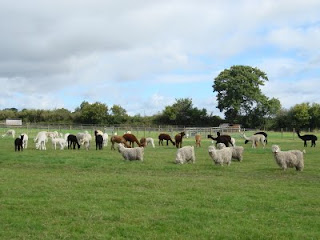 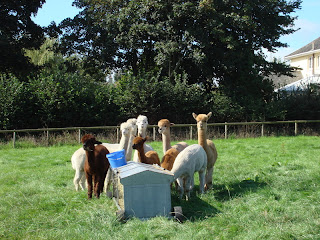 We arrived home from our holiday on Saturday evening - a day earlier than planned.  We had a lovely break including two Agility Competitions.  One in Northamptonshire and the other in Suffolk.
Son, David, and family looked after the farm whilst we were away but as they had only just returned from holiday themselves before taking over, I think they were quite glad to go home, even though they enjoyed their stay.  David had to kill one of the white hens as it was obviously failing.  I had noticed that she was not getting on her perch at night with the others and was looking a bit lack lustre in the field, so I was not surprised.
Maddy, our older lurcher, had stayed on the farm and unfortunately her shoulder was injured in some way.  Jane took her to the vet who thought it was a strained ligament but by the time we got home on Saturday her shoulder and both sides and underneath her chest were very swolen and her left leg was very thick and swolen, so I took her back to the vet on Monday and saw Tessa.  By the time we got there late on Monday afternoon the swelling had subsided a lot but I was still concerned about her panting especially as she has a heart murmur.   Although usually a murmur is nothing to worry about, I though perhaps something had changed.  Tessa seemed to think, as I do, that she had received some sort of trauma to her shoulder - possibly a kick - which was also my feeling especially as Maddy is always poking her nose in where it is not wanted.  Her heart was not a problem so probably the panting was because of pain or worry about her injury.  The lump on her shoulder was firm and was likely to be bleeding under the skin - i.e. a wacking great swolen bruise.  She prescribed some more Metacam (pain killer and anti-inflammatory) as she will need it for quite a while.  Maddy seems pretty bright and happy now and mooches around quite happily so she is obviously making a good recovery.   Let's hope she has learned her lesson and stays clear of the back end of alpacas - or perhaps goat horns!!
It looks as though there had been a lot more rain here than we experienced.  The grass is looking green and inviting and all the alpacas and goats seem in good condition.﻿  There were a few jobs which we did not do before we left - as usual running out of time, so we got on with them almost straight away.  My main job of course was taking care of ten days' worth of washing - the ironing still staring at me!
Several of the cria needed vaccinating and although Tony, our helper, had struggled valiently we felt that we should give him a hand to catch up with paddock cleaning etc: on Monday.  We also have two alpacas with ongoing skin problems despite many attempts by ourselves and the vet, so we applied iodised salve to their ears and legs and checked the eartags of some cria who were tagged last.   All was well and they obviously did not miss us at all!!
Yesterday Nick and I spat off all the females (i.e. presented them to a male alpaca for mating. ( Pregnant females will reject the male  by spitting, kicking and running away.)  Most seemed to think they were pregnant and we mated two who had recently given birth, remated another and today we remated a second one whose pregnancy had not held.
As the weather forecast was not very promising Nick and Mike replaced a very hefty gate post as both the gates it supported were dragging on the ground and very heavy and difficult to open or close.  Mike used his new digger and he was pleased with the results.  Nick did quite a lot of the digging as he has used the same model before.   It took a long time because the ground is so hard with lack of water and naturally stony.  It was about 7 p.m. by the time they finished and Mike will still have to hang the gates which is apparently quite a big job in itself.
In the meantime I mowed the "lawn" in an effort to beat the incoming weather but as it has turned out it has not been too bad at all so there was no panic.  Famous last words!!  I expect we will pay for it later.
We are waiting for the shearer to come and shear the goats in the next few days.
Posted by Geraldine at Wednesday, August 24, 2011