Last night I was reading in bed having arrived home from a pub meal with my friend, Pauline, just in time to put the dogs to bed in their kennel.  Jax, my son's dog who is staying with us while the family go to Portugal for a couple of weeks, decided that she wanted to sleep in the kennel.  As she had made herself comfortable in Jake's bed I decided to let sleeping dogs lie, as it were, and let Jake sleep indoors.

A couple of hours later I thought I heard the scream of an animal being killed but assumed it was a rabbit or other small mammal, but it seemed to be accompanied by a lot of noise and unusual sounds which made me think that maybe a fox had got in with the chicken.   By this time Mike was also awake and we both shot out.  Jake dashed out too and started to bark excitedly.   We opened the garden gate and he and Romie galloped off at top speed barking as they went.   We then saw the fox cutting back across the paddock where the chickens live.   He just disappeared.

Shining the torch around we saw one of the Black Rock hens gasping her last and so after making sure there was no further sign of the fox we went back to bed.

About an hour later I heard the same sounds again and sure enough he was back.   This time he had killed a further three hens and Mike found the  Cockrell sitting traumatised in the middle of the paddock.  He survived being attacked by a fox once before so we did not give much for his chances of pulling through once again.  Mike, however, put him in the hen house and we crossed our fingers.  Amazingly this morning he was up and crowing loudly at about 4.30 a.m. bless him!!

We had a final scout round trying to work out where the murderer was hiding when we heard a rustling in the hedge and Jake and Romie got very excited.  Then a fox ran towards me and ducked under the wire netting heading for the hedge where the rustling was coming from - presumable to join his mate.  He nearly ran over my feet at high speed and I was so taken by surprise that I screamed suddenly and loudly.  He ducked away and disappeared into the night, and I discovered that if I scream in the middle of the night nobody will hear me!!

Jake gave a final display of bravado and barking and then we noticed that Romie had disappeared.   We called and whistled to no avail and Mike was just setting off to investigate in next door's field in case she had accidentally gone through the hedge and could not get through when he saw her standing at the yard gate.  Luckily she has a white chest or he would not have seen her.   She had obviously run all the way round the field and come to a dead end when she reached the gate.   She did not have the sense to bark or squeak to let us know she was there waiting to be let in.

We think that when the automatic pop hole closed for the night the cockrell and the hens which were killed must have been roosting in the field shelter.  In future we will make sure they have all gone to bed in right place.   A bit of a nuisance because the point of the sheds closing automatically is to save us having to do a late evening patrol.   Up to now the chickens have been quite reliable at putting themselves to bed.

After a cup of tea and some mindless television we finally went back to bed for a much shorter night's sleep than planned. 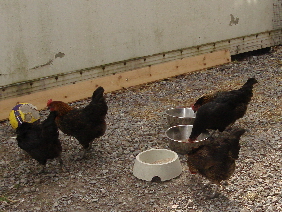 This morning Mike has had the horrid job of disposing of bodies and clearing up feathers with the hoover which is really designed for cleaning up poo in the paddocks.  We would have been upset if the fox had caught one hen for his dinner but at least you could say that was reasonable but why do they have to go on a killing spree when they cannot possibly eat the kill?
Posted by Geraldine at Thursday, July 28, 2011