Yesterday I wanted Nick to help me trim toe nails of all the alpacas as they had not been done since shearing in May apart from the alpacas we had shown.

We set up the barn as usual and decided to get the boys in first as that includes Ben, the gelding who really hates having his toe nails trimmed.  Mike would be around to help to hold him whilst I cut his nails.  We normally blindfold him with a towel as this keeps him calmer.  We put him on a halter and covered his eyes and he was actually quite relaxed and co-operative but when I came to trim the nails they were rock hard and instead of the quick snip snip which I usually do I had to gradually pare them back to a reasonable shape.  In the end I had to give up.  See photo of Ben below.

Although we have had some rain recently the ground is still very hard and I suppose the lack of moisture in the ground has meant that the nails have become very dry too.   We did manage to trim all the males' toe nails but I had to hand over to Nick a couple of times because my hands were aching so much trying to close the clippers and achieve a cut.

We have decided to do the rest of the herd in batches on consecutive Tuesdays so that we do not have too many to do at once if they are that tough.   If we have some rain it might well be a different story next Tuesday.

We also weaned the kids - i.e. separated them from their Mums.   All except number 7 were fairly accepting of the change.  I expect they had been gradually suckling less and eating more grass.   We put their Mums in a shelter where they could not see them but of course number 7 looks on me as her source of milk as she has been bottle fed so she is finding it more difficult to get on with life without her Mum and me.

Two chickens have died - I think they were both quite old and probably found the heat a bit much.  There were no signs of illness or parasite infestation of any kind.  This morning I found the remains of a third one - or at least a pile of feathers.   We think she must have been shut out when the automatic doors on the chicken shed shut last night.  Alario is in the same paddock but the murder took place behind the sheds so perhaps he did not see.

David and Jane with our grandchildren Zach and Tara came down yesterday evening as they were dropping off Jax, their dog, for us to look after whilst they go to Portugal for a couple of weeks.  When they come back they are going to look after the farm so we can go away on our annual dog show holiday.   We had a BBQ supper and some champagne to celebrate our planning permission to convert the barn into a house.  So that was very enjoyable. 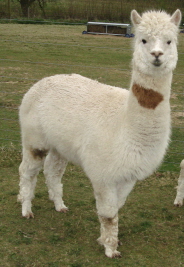 The grass is looking a bit sorry for itself - we could really do with some prolonged rain, although it would spoil holidays for a lot of people.
Posted by Geraldine at Wednesday, July 27, 2011