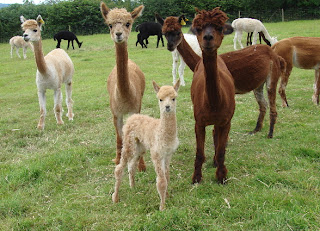 We were at an agility competition last weekend when my mobile phone rang.  It was my sister in law, Pam, who together with her husband Malcolm, were farm sitting for us.  She was in the goat paddock and had slipped, breaking her ankle, she thought.  I phoned my neighbour who kindly went round to stay with her whilst waiting for the ambulance, as Malcolm has health problems and we were worried that he would overstretch himself if he tried to do too much.

We were in Wales and we did the fastest de-camp we have ever done and were on the road home within about 15 minutes of the call.  We made good time and Mike  and Malc went to Exeter Hospital to collect Pam.   They spent another night with us before heading off home and after a further operation Pam now has the long wait for her ankle to heal.  Needless to say they will not be farm sitting again this year, which means that Mike and I will be taking it in turn to go to shows until our holiday in August when David and family are farm sitting.

As I could not go to the show today, I have taken the opportunity to do some agility practice at home. It is not the same,but the dogs still enjoy it!!

Ginger gave birth to her first ever baby girl at lunchtime today.   She has previously had 4 boys!   The cria is very sweet but  at the moment her fleece is a very pretty colour and is very soft but it is not as good as the boys have been.   This may change over the next few weeks or months as I have made this sort of judgement prematurely before.  The photo is not the best one of Ginger (the dark female) but I thought her expression was very amusing!!

It was really strange because whilst I was watching the cria to make sure she suckled, the other females would not leave her alone.   Usually after a birth they all gather round to welcome the newcomer and have a good sniff and then lose interest after five or ten minutes but for some reason with this one two or three of them just continued to follow her around for ages.  I was a bit concerned that they were distracting her from feeding and so decided to put her and her mother in the shelter, but Ginger  became so distressed that I felt it was counter productive and let them out again.  I shooed the others away but they kept coming back so in the end I let them all wander down to the day paddock and Mum and cria went too.  I kept checking on them and finally saw the cria suckling quite professionally, so I felt reassured that nature was taking its course. That is the first hurdle of her little life.

Although the weather looks good I brought them all back to the night paddock at about 4p.m. so that they are near a shelter.  If it rains I hope that Ginger will follow the lead of the other Mums who, unusually, have had the sense to go into the shelter with their cria when it has rained heavily, which it has done a few times over the last few days.

My vegetable patch is doing very well.  I have Pak choi, cabbages, and little gem lettuces all ready or nearly ready and mange touts, broccolli and tomatoes with quite a way to go.   I also have loads of strawberries and Mike's gooseberry bush is laden even though it is only a couple of feet tall at the moment.  We planted runner beans in the winter paddocks as it stays damp in what we call the wetlands, but they are not thriving, so maybe it is too damp or they are not getting enough light.  I also planted what was left of a sack of potatoes and they are shooting through - probably not as good as seed potatoes but even if we get a few it will be useful.

The goats are all looking a bit overweight which is surprising because they are not having any extra feed apart from a bit of hay.  The bucks were free ranging but we have shut them back in their small paddock to try and restrict their diet abit.    It is surprising really because with the lack of rain I would have thought the grass would be quite poor nutritionally but apparently not - unless it is wind!!  On that note I'll sign off.
Posted by Geraldine at Saturday, June 11, 2011