Well it does not seem to be rising above freezing and the wind is really bitter but we have been quite lucky in that we only had a small amount of snow.

I am taking the opportunity to try and improve the Alpacastuff website.  You would have laughed to see me with a polystyrene model head outside in a high wind trying to take photos of snoods in the hope that they will sell better when people can see how they look.  If they are not on a model they just look like a scarf.

We have just received the first of the Aran Sweaters knitted in  our new Champagne colour which is a mixtureof fleece - mostly white but with a dash of fawn.  They really look stunning and I am hoping that they will sell well.

Mike has drawn the short straw in  that he is feeding the goats and kids and breaking up the ice in the water troughs so that I can get up to the office.  It's a tough job but someone has to do it.  To be fair I gave been doing more than my fair share of paddock cleaning to make up for the present treat of workin g indoors.

The hay is going down rapidly and they are eating a lot more than usual at this time of year.  We would have liked to have let the new chick out into the wide world by now but we are worried that it will die of the cold if it gets lost or gets separated from his Mum, so its release is bei g delayed. 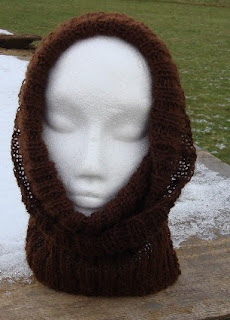 The dogs are still sleeping out in  their kennel but Mike has insulated it with rubber mats on the floor and carpet round the walls and Charlie who is quite thin and with the thinnest coat wears a coat in bed just in case he gets too cold.  The cat manages to sneak indoors most nights.
Posted by Geraldine at Wednesday, December 01, 2010